Japan’s travel subsidy campaign was launched on Wednesday to help revive a domestic tourism industry hit by the novel coronavirus, but Tokyo ruled out due to concerns over a resurgence of infections in urban areas.

The “Go To Travel” campaign, under which the government covers part of the cost of tourist trips, was launched despite fears the initiative could worsen the virus outbreak.

Photo taken at a travel agency in Osaka, western Japan on July 21, 2020 shows flyers about the government’s travel subsidy campaign starting the next day to revive a domestic travel industry hit hard by the coronavirus pandemic . (Kyodo)

Tokyo Governor Yuriko Koike urged residents to ‘take thorough anti-infection measures and avoid going out as much as possible’, while warning of a ‘second wave’ of infections ahead of a weekend four days from Thursday.

Japan completely lifted the state of emergency at the end of May.

Earlier in the day, Prime Minister Shinzo Abe also called for the thorough implementation of anti-infective measures and said, “We will cautiously resume economic activities with the cooperation of the people.”

The travel subsidy campaign was thrown into turmoil last week when the government took the abrupt decision to cut travel to Tokyo and by its residents from the program due to a spike in new cases in the capital.

Chief Cabinet Secretary Yoshihide Suga said on Wednesday that the government has no intention of excluding Osaka Prefecture from the campaign as the number of infections there is on the rise.

Some people have expressed criticism of how the campaign has been implemented. 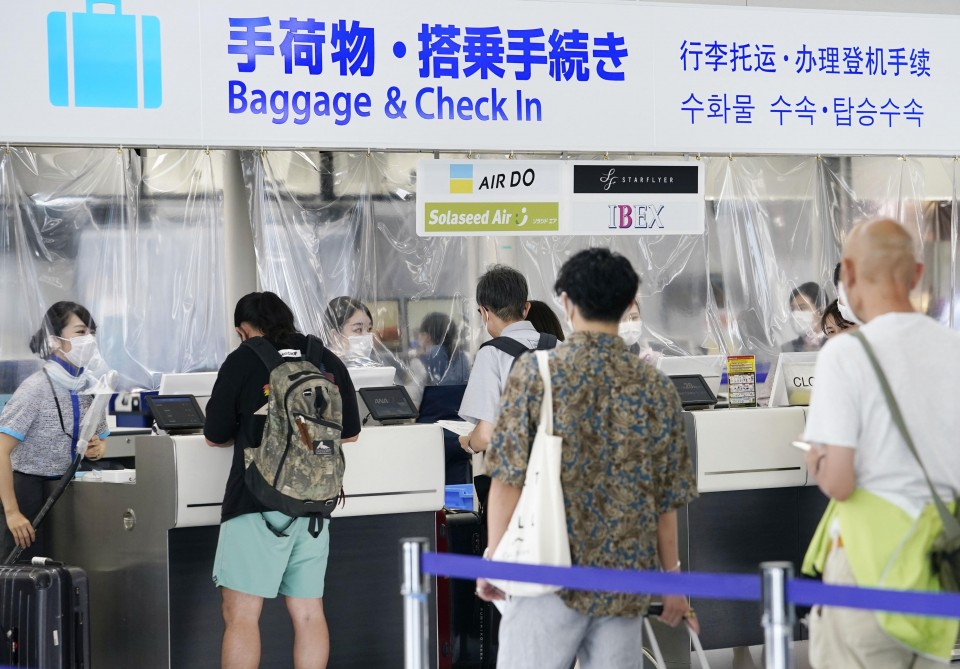 Passengers line up at a departure hall of the Central Japan International Airport in Tokoname, Aichi prefecture on July 22, 2020, on the first day of the central government’s travel subsidy campaign aimed at bolstering an industry domestic travel hard hit by the coronavirus pandemic. (Kyodo)

“I find it unfair (that Tokyo has been excluded),” said a 59-year-old woman from the city, who was departing from Haneda airport for a four-day trip with her 62-year-old sister to Hiroshima and Shimane. prefectures and elsewhere.

Others have complained that the application websites for the campaign are not user-friendly.

Haruna Niimi, 24, who was flying to Tottori Prefecture from New Chitose Airport in Hokkaido to meet a friend, said she had given up using them.

“I looked at several websites but found the application process too complicated,” she said.

The four-day weekend from Thursday, which includes a specially created Sports Day holiday on Friday, was originally meant to mark the start of the now-postponed Tokyo Olympics.

As domestic travel demand is expected to rise, a runway used by low-cost carriers at Narita Airport, east of Tokyo, reopened on Wednesday for the first time in three months.

As part of the 1.35 trillion yen ($12.6 billion) tourism boost, the government will end up subsidizing up to half of travel expenses, including accommodation and transport costs. Initially, it will offer discounts worth 35% of the total costs.

The remaining 15% will be covered by vouchers that will be issued after September for food, shopping and other travel activities offered in the destinations.

The government decided last Thursday to exclude travel to and from Tokyo after the capital reported a single-day record of 286 new infections.

In Japan, Tokyo is the area hardest hit by the virus, accounting for around a third of infections in the country.

Tourism Minister Kazuyoshi Akaba initially said the government had no intention of offsetting the cancellation costs incurred by the decision to exclude Tokyo at the last minute, but reversed the position on Tuesday amid a public outcry a day before launch.

The grant program was originally scheduled to start in August ahead of Japan’s summer vacation around the middle of the month, when many people living in major cities return to their hometowns. But it was brought forward in time for the four-day long weekend from Thursday.